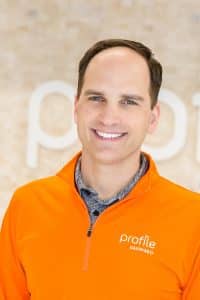 Jarin Jaffee is the owner of Profile by Sanford, a nutrition and weight loss coaching program recently opened on Secor Road. For Jarin, Profile is personal. He lost 32 pounds through Profile while living in southern Indiana. When his family moved home to Toledo, and Jarin was ready to change careers after 17 years as an educator and administrator, he knew Profile was a perfect fit for his next chapter.

Jarin grew up in the Washington, D.C. area before attending Kenyon College in central Ohio. As an intern at Culver Academies (Culver, Indiana), Jarin fell in love with education and the administrative side of schools and pursue an M.B.A. at University of Notre Dame while teaching, coaching, and mentoring at Culver. He moved to Toledo for a position at Maumee Valley Country Day School that led to an opportunity as Head of School at Evansville Day School (Evansville, Indiana). The Jaffee’s moved home to Toledo in June 2018 and Profile opened in April of this year.

Profile has experienced incredible early success with 160 members having lost close to 1900 pounds due to Profile’s one-on-one coaching and structured nutrition plan, all backed by one of the largest nonprofit healthcare systems in the world. The Toledo location is part of a franchise of 125+ stores with plans to open another 380 over five years.

Jarin is married to a Toledo native (Jenni) and they have two boys (Emerson, age 7 and Everett, age 4), a Golden Retriever (Jack-Jack), and a cat (Sisi). They live in Holland in the Stone Oak neighborhood.

Weight gain is a growing problem and obesity is on the rise, especially in the Toledo area. A Lucas County Community Health Assessment reported over 70% of residents are overweight or obese. According to the CDC, “medical care costs of obesity in the United States are high. In 2008 dollars, these costs were estimated to be $147 billion. The annual nationwide productive costs of obesity are as high as $6.38 billion.”

One major factor: portions. Over the last 25 years, portion sizes have been growing right along size the average American’s waistline. For example, what qualifies as one restaurant portion today is typically enough food for two or even three people.

Why have portions grown so much? Documentaries like Supersize Me and myriad articles from nutritionists and wellness advocates around the world have taken notice and brought the issue to the forefront. One reason is us: citizens of developed countries often believe “bigger is better.” Restaurant hamburgers have grown by over 23%. We also are experiencing a decline in quality, and the food industry has replaced taste and healthier ingredients with size. The evolution of McDonald’s french fries recipe is a prime example.

Another cause is food culture. Competitive eaters. Food “stunts.” Shows like Man v. Food. These have contributed to an industry around food challenges, larger portions, and entertainment focused on unhealthy food consumption. This has trickled to restaurants and even to our own kitchens.

The coaches at Profile by Sanford Toledo have the following suggestions to stick to serving sizes:

Pay attention to how many servings are in a single portion of food. Many products (soda, soups, etc.) appear to be enough for one but could contain several servings per container.

When dining out, plan to take some of your meal home when you order. Most restaurants will box up half of the meal for you before serving it. When you’re snacking at home, avoid eating directly out of the box or package. Measure a serving size on a small plate and put the rest away.

You’ll tend to eat less when you feel satisfied. Eat slowly so you can pay attention to your hunger and stop when appropriate. Eating with your non-dominant hand can also force you to slow down and focus on the act of eating.

Eat a serving of vegetables before your meal and make sure to drink plenty of water before and during the meal. Profile suggests a minimum of 64oz of water per day and if you make a habit of 8oz before lunch and dinner you’ll be 1/4 of the way to your goal.

Most of us eat more at a restaurant compared to when we are at home. Cooking healthy meals, like those included on Profile’s blog, Facebook page, and in our cookbooks, are less expensive and almost always more portion appropriate.

We may not be able to shrink portions back to 1960’s proportions, however we can be more mindful of our eating habits to stop portion distortion in its tracks.

Portion sizes are an example of the nutrition education during one-on-one weight loss coaching in the Profile by Sanford program. We are changing lives, one relationship at a time. Learn more about Profile at profileplan.com/toledo and @ProfilebySanfordToledo. 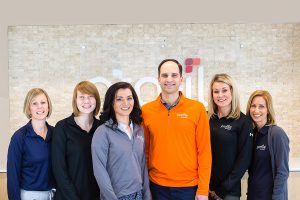